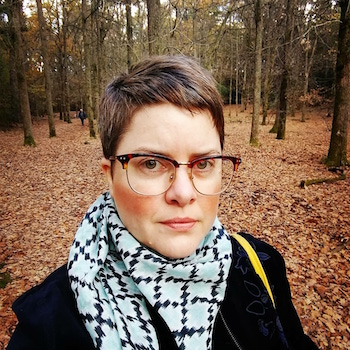 Melita White, originally from Adelaide, Australia, has engaged intensively with music and composition since childhood. As a composer she has created music in a range of styles: from experimental and chance-based instrumental works to her own Neoplastic style of composition, 12-tone chamber music, and electroacoustic works. More recently, her music has explored feminist and personal themes. Melita considers composition to be a powerful tool that can bring about personal and social awareness and change.

Melita is also a classically-trained flautist, having studied at the Canberra School of Music and Flinders Street School of Music. Between 1993 and 1995, she worked extensively with Adelaide's experimental ensemble ACME New Music Co. as a flautist and composer. In 1995 Melita founded Auricle, and was artistic director, concert manager, composer and performer with the ensemble until 2001. With Auricle, she commissioned dozens of new works by Australian composers and engaged emerging young Adelaide musicians.

Melita has studied with a number of composers including Catherine Schieve, Raymond Chapman-Smith and Thomas Reiner. She participated in a composition workshop with Philip Glass in Perth in 2000. Since 2000, Melita has been based in Victoria, Australia. She has a Master of Arts (Music Composition) from Monash University, for which she received an Australian Postgraduate Award. Melita has also lectured at Monash, where she created and taught a new unit about experimental composition.

Melita's music has been performed widely in Australia: by flautist Geoffrey Collins, The Firm, Halcyon, The Seraphim Trio, and re-sound ensemble. Festivals that have featured her work include the Adelaide Fringe Festival, The Barossa Music Festival, The Australian Women's Music Festival and the Beijing International Congress of Women in Music. Her music has been broadcast on community, local, national and online radio stations in Australia, including numerous broadcasts and interviews on ABC FM's New Music Tonight program. Melita’s electroacoustic mass, Pope Joan, was part of the National Gallery of Victoria’s Melbourne Now exhibition in 2013-14, which attracted over 750,000 visitors.

In 2008, Melita received a Development Grant from Arts Victoria to create Traces, an electroacoustic work about her father's experience of Alzheimer's disease. Melita was included in Rosalind Appleby's 2012 book Women of Note: The Rise of Australian Women Composers. She is a fully represented artist of the Australian Music Centre and is represented by APRA.

Melita enjoys working across a number of different disciplines. Her work as a textile artist has been exhibited and sold at Craft Victoria and in Melbourne indie boutiques under the red suede kitten label. She was one of 200 artisans featured in the book Handmade in Melbourne. Melita has a keen interest in the sense of smell and the science of perfumery and is a synaesthete. She is also a poet and writer, and created the blog Feminist Confessional. All of these interests inform, intersect with, and influence her work as a composer.