Melita White was born in Adelaide, Australia, and helped shape the new music scene there in the 1990s, working with her own ensemble Auricle, ACME New Music Co., The Firm, and The Seraphim Trio. She now lives and works in Victoria, Australia. Melita's music has been widely performed in Australia, overseas, and on radio. Her recent work has focused on feminist and personal themes. Melita considers composition to be a powerful tool that can bring about personal and social awareness, healing, communication and change. She works in a range of styles and uses different media: from solo and small chamber instrumental works through to large-scale electroacoustic works. Melita is also a classically-trained flautist, and enjoys many forms of creativity: she is a textile artist, a music educator, a poet and writer, and is a synaesthete. She has also written about and engaged intensely with scent and olfaction. 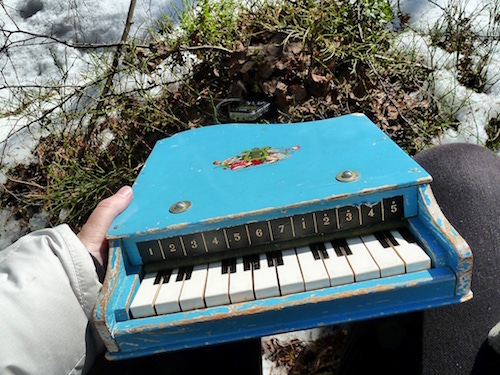 lots of love, gran at ACMA

Lots of Love, Gran, a one minute long electroacoustic tribute piece about Melita’s grandmother, was performed at the VCA’s Federation Hall, Melbourne, on Friday, 11 July, 2014. This performance was part of the Australasian Computer Music Conference’s 60x60 Project, a series of two concerts consisting of 60, one minute long pre-recorded or electroacoustic pieces. Lots of Love, Gran was created from material for an installation Melita created in 2002, called Matrix.

Melita's electroacoustic work Pope Joan is currently playing on the sound pods at Melbourne Now, a National Gallery of Victoria exhibition. Pope Joan is part of the Now Hear This sound component of Melbourne Now, which presents music by over 60 Melbourne composers, musicians and sound artists.

Pope Joan tells the story of a woman who may (or may not) have been pope in the 9th Century. Joan's story is the stuff of legend, unconfirmed, uncertain, and yet it has been wondered and written about for centuries. Versions of the story vary, but all agree that Pope Joan ruled for a short time around 850 while successfully disguised as a man, until she unexpectedly gave birth one day in a public procession, exposing her womanhood. This led to her subsequent humiliation and punishment, and, some say, her death.

Melita's compositional retelling of Pope Joan's story is richly layered: it uses 9th Century Roman Catholic Mass structures, sung and narrated vocal passages that draw on a range of historic texts, and heavily processed electroacoustic sections. All vocal and instrumental material in Pope Joan was performed by the composer.

Listen to an excerpt of Pope Joan here.

Melbourne Now runs across both NGV Galleries in Melbourne: at NGV International and The Ian Potter Centre: NGV Australia.